In the past, Responsible Business Conduct (RBC) has been viewed by some primarily as a preoccupation of the West. Clearly this characterization no longer holds. Far from being limited to North America and Europe, good examples of RBC initiatives can also be found in Latin America. Indeed, during a recent trip to the region, I found that some areas Latin American countries are even more advanced than OECD countries.  A plethora of recent initiatives demonstrate that Latin America is taking a leadership role in this field. 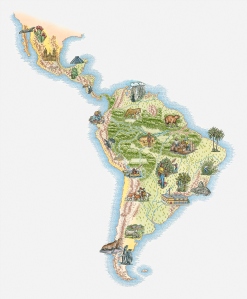 Argentina, Brazil, Chile Mexico and Peru and are all members of the OECD Working Party on Responsible Business Conduct  as well as adherents to the OECD Guidelines for Multinational Enterprises.  They have National Contact Points (NCPs) to promote and oversee implementation of the Guidelines in their respective countries. These mechanisms are growing stronger through ongoing capacity building, peer learning and awareness raising initiatives, enhancing the influence of the Guidelines and raising the profile of NCPs as a grievance mechanism for incidents that arise under the Guidelines in these countries.

In early April, Costa Rica became the newest adherent to the OECD Guidelines for Multinational Enterprises and likewise set up an NCP. I recently spoke at  an event in San José  celebrating Costa Rica’s adherence to the OECD Guidelines and the launch of its NCP. In many ways Costa Rica was already a leader in the field of RBC, the most well-known example being Costa Rica’s progressive environmental policies and developed ecotourism industry.  Costa Rica’s government has also been active in engaging with the business community and other stakeholders in creation of corporate social responsibility (CSR) policies as well as in ratifying conventions with explicit incorporation of RBC provisions. Additionally it has included environmental and labour provisions within their recent trade agreements.[1]  The nation’s recent adherence to the Guidelines will further raise its profile in the realm of RBC by demonstrating that its approach aligns with international standards.

Colombia, another adherent to the Guidelines has also started taking an active role in implementation of the OECD Due Diligence Guidance for Responsible Supply Chains of Minerals from Conflict-Affected and High-Risk Areas (‘Due Diligence Guidance’) through organizing training workshops and requesting sector specific guidance for its gold industry. Colombia will be the first Latin American country to undergo a baseline assessment of responsible mineral supply chains under the Due Diligence Guidance. ,  Additionally, I was impressed to see that some Colombian  enterprises have a very sophisticated approach to stakeholder engagement with indigenous people. Cerrejon for example, a Colombia coal mining enterprise,  implements programs into their corporate strategy  aimed at  protecting the cultural heritage and improving the standard of living of indigenous peoples affected by their operations.

Additionally, many countries that may not have already taken an active role in RBC initiatives seem well poised to do so. For example, Panama is relatively new to the arena of RBC. However, during my visit there I perceived strong enthusiasm from the political leadership to do more in this field.  Furthermore, Panama’s strong and dynamic economy is capable of supporting such initiatives.  A new government will be elected in Panama in early May of 2014. This government should seize the opportunity to participate in the regional trend and embrace the culture of RBC. In order to do this, I hope they would follow the lead of the other Latin American governments and as a first step become an adherent to the OECD Guidelines.

Regional efforts are also being organized to address responsible business conduct in Latin America. IntegraRSE (The Central American Integration for Corporate Social Responsibility), represents one such initiative. IntegraRSE is composed organizations from Costa Rica, El Salvador, Guatemala, Honduras, Nicaragua and Panama and brings together more than 600 companies in the region to promote a permanent culture of corporate social responsibility in the region. [2]

Bilaterally, the Community of Latin American and Caribbean States (CELAC ) countries have been engaging in dialogue on this subject with the EU and were called upon to submit a report of national action plans on CSR at the next summit in 2015.

Leadership at the International Level

Likewise, in the international arena Latin American countries have been proactive in advancing RBC issues.  For example, Brazil was the head of the working group tasked to develop the ISO 2600 standards on social responsibility. It is also a leading member of The Group of Friends of Paragraph 47, a Rio +20 initiative advocating corporate reporting on sustainability practices.[3]   Latin American countries have also been active in getting involved with the UN Global Compact, a framework for the development, implementation, and disclosure of sustainability policies and practices particularly in the fields of business of human rights, labour, environment and anti-corruption.  As of today 17 Latin American nations are members of the Compact.

Although significant progress is being made in the field of RBC amongst Latin American countries, some important challenges still remain.  Latin America has a large and varied indigenous population which makes effective engagement with indigenous groups an important issue for companies operating within the region. Additionally, labour issues remain a challenge in some areas of the continent. A recent study found that labour standards represent the primary risk in supply chains present in South America, as inadequate working conditions and forced and child labour are still present in some parts of the continent. [4] Adherence to RBC recommendations under the Guidelines will necessitate improvement in the status of these issues and may encourage such improvement through providing guidance to companies on conducting effective risk-based due diligence of their supply chains.

Latin American countries are increasingly playing a leadership role with regard to RBC through national, regional and international initiatives. Although challenges remain, the demonstrated commitment to the culture of RBC gives me grounds for optimism.  As adherence to RBC recommendations grows, Latin American nations will benefit not only from better working conditions, cleaner environments, and less adverse impacts to local communities but may also increase their investment profile globally.

[3] Paragraph 47 refers  to the 47the paragraph  of the Final Document of the Conference on Sustainable Development  (Rio +20 ) and  states ‘’ We acknowledge the importance of corporate sustainability reporting and encourage companies, where appropriate, especially publicly listed and large companies, to consider integrating sustainability information into their reporting cycle. We encourage industry, interested governments as well as relevant stakeholders with the support of the UN system, an appropriate, to develop models for best practice and facilitate action for the integration of sustainability reporting, taking into account the experiences of already existing frameworks, and paying particular attention to the needs of developing countries, including for capacity building.’’

“Going Out” in Search of Oil and Gas: How should Chinese companies investing abroad tackle human rights challenges? By IHRB Board Member Motoko Aizawa

”In the run-up to the European elections, France and the Netherlands want to highlight that  European trade policy, and policy in favor of the internationalization of business should  embody social and environmental progress and values.”

21/03/2014 – The European Commission has proposed an integrated EU approach to stop profits from trading minerals being used to fund armed conflicts. The package of measures aims to make it more difficult for armed groups in conflict-affected and high-risk areas to finance their activities through the mining of and trade in minerals. The focus of the approach is to make it easier for companies to source tin, tantalum, tungsten and gold responsibly and to encourage legitimate trading channels [….]

Professor Roel Nieuwenkamp, Chair of the OECD Working Party on Responsible Business Conduct, welcomed the new EU initiative, and noted that he looks forward to the on-going legislative process on the draft regulation, bearing in mind the different views of stakeholders. “The European Commission’s use of the OECD Due Diligence Guidance as the standard for responsible mineral sourcing is vital to maintain clarity for business and contribute to a level playing field” he said. “The accompanying measures in the Commission’s communiqué also offer a good basis to promote responsible sourcing of minerals, avoid unintended consequences, and encourage private sector investment and trade in all areas of conflict and high-risk.”