In July 2015, The New York Times published an article about forced labor on Thai fishing boats. In the article they follow the story of Lang Long, a man who was shackled by the neck, working for 3 years as a slave at sea. He was one of the many Cambodian migrant boys and men working on Thai boats that supply fish to consumers worldwide. The men featured in the article are fortunately now free, but many slaves are still involved in the production of goods for global supply chains. 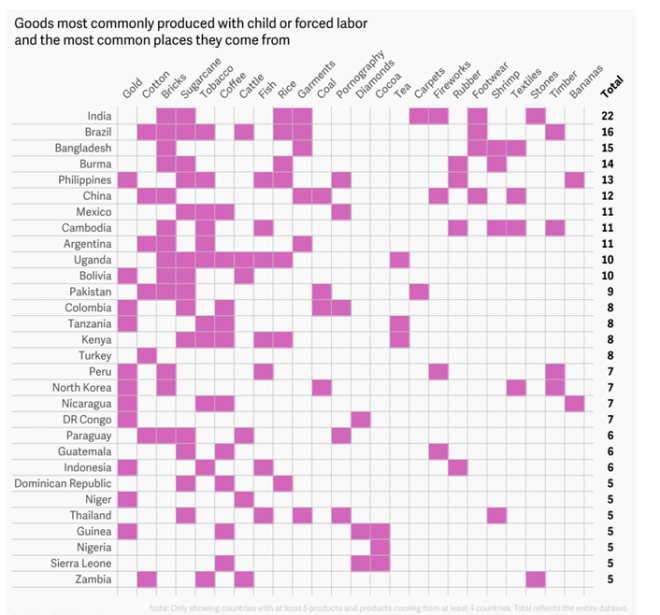 In previous articles I have covered some of the innovative regulatory initiatives taken to promote supply chain responsibility (e.g. the UK Modern Slavery Act, the proposed law on due diligence in France, the Swiss referendum for a due diligence, and the EU non-financial reporting directive). Currently 8 Parliaments in the EU are calling on European Parliament to follow the French example.

Some recent developments in the United States may have even more impact on supply chain responsibility with global trade implications.

This February, President Obama signed in the Trade Facilitation and Trade Enforcement Act (H.R. 644). Section 910 of this law strengthened restrictions on the import of goods into the United States produced with forced labor, closing a loophole that existed in the Tariff Act of 1930 which allowed import of such goods if the product was not made in high enough quantities domestically to meet the U.S. demand.

This law accompanied two other moves to tackle modern slavery, particularly in the fishing industry, by the Obama administration. In addition to the new act, the administration has also enacted the Port State Measures Agreement which bars foreign vessels from accessing ports if suspected of illegal fishing. Furthermore the National Oceanic and Atmospheric Administration, which regulates fishing, announced new reporting requirements aimed at developing a better understanding among US companies of where seafood imports are sourced from.

While regulation is important, enforcement is arguably even more so. Indeed the Trade Enforcement Act is already being enforced. Recently the U.S. Customs authority issued two “withhold release” orders, preventing goods from entering the country because of suspicions that they were made using forced labor.

The first order came on March 29th against imported soda ash, calcium chloride, caustic soda, and viscose/rayon fiber that was manufactured or mined by Chinese company Tangshan Sunfar Silicon. U.S. Customs and Border Protection (US CBP) believes that these products were made by forced convict labor. The second order, on April 13th, was against imported potassium, potassium hydroxide, and potassium nitrate that is believed to be mined and manufactured by the same company using convict labor.

According to CBP Commissioner Kerlikowske: “CBP will do its part to ensure that products entering the United States were not made by exploiting those forced to work against their will, and to ensure that American businesses and workers do not have to compete with businesses profiting from forced labor.”   The Business & Human Rights Resource Center is tracking enforcement of the Act on their site.

These orders are an important part of enforcing the new ban and ensuring criminals that profit from human trafficking are not supported. Effective enforcement of this provision also provides incentives to business to protect their supply chains from forced labor to guarantee all of their imports are cleared for entry into the United States.

Recently Turkmenistan News (ATN) and International Labor Rights Forum (ILRF), partners in the Cotton Campaign, filed a complaint with the US CBP. The complaint concerns the import of cotton goods made using forced labor from Turkmenistan by companies, including retail giant IKEA. The government of Turkmenistan engages in a practice where annually farmers are forced to deliver cotton production quotas and thousands of citizens are required to pick cotton or are faced with a penalty. The complaint calls on U.S. Customs to classify cotton goods, such as the IKEA products, from Turkmenistan as illicit, issue a detention order on all imports of them, and direct port managers to block their release into the United States. CBP has yet to respond.

If the U.S. government and American businesses set a precedent that forced labor will not be tolerated, other countries are likely to follow suit. However, how U.S. government follows through on implementing the new ban, is essential to this effort.

Furthermore, given the extensive pervasiveness of modern slavery in global supply chains companies must be armed with tools to protect themselves and their supply chains from liabilities under these regulations.

Strong supply chain due diligence processes should in my opinion be an accepted defence under these new laws. This should include the notion that supply chain responsibility means often not ‘cut and run’ from risky suppliers, but ‘stay and improve’. Else these regulations could have devastating negative impacts on livelihoods of legitimate businesses operating in high risk areas. The OECD has provided guidance to companies in designing such due diligence processes. The OECD Guidelines for Multinational Enterprises (the OECD Guidelines) recommend that companies carry out supply chain due diligence to identify, prevent, mitigate and account for all adverse impacts that they cover, which include child labour and forced labour issues.  For negative impacts arising within a company’s supply chain the Guidelines recommend that companies acting alone or in cooperation with others use their leverage to influence the entity causing the impacts to prevent or mitigate the harms.

The OECD Guidelines are referenced in the statutory guidance of the UK Modern Slavery Act, which note that “they provide principles and standards for responsible business conduct in areas such as employment and industrial relations and human rights which may help organisations when seeking to respond to or prevent modern slavery.’’

In addition to general recommendations the OECD has developed more detailed guidance on how these expectations can be responded to in specific sectors. For example the OECD Due Diligence Guidance for Responsible Supply Chains of Minerals from Conflict-Affected and High-Risk Areas, the global standard on mineral supply chain responsibility, provides a 5 step framework for due diligence to manage risks in supply chains of minerals including forced and child labour in the context of artisanal mining. This Guidance is now the leading standard for avoiding child and forced labour in mineral supply chains and has been integrated as an operating requirement in the DRC, Rwanda and Burundi.

The FAO and OECD recently jointly developed a Due Diligence Guidance for Responsible Agricultural Supply Chains which also provides due diligence recommendations to manage risks related to forced labour and child labour in high risk agriculture sectors including palm oil and cocoa. Such approaches could be applied in the context of the Thai shrimping industry as well. Lastly the OECD is also developing a Due Diligence Guidance on Responsible Garment and Footwear Supply Chains, which provides specific recommendations for addressing risks of forced and child labor. This Guidance will be launched later this year and will be relevant to migrant workers in textiles factories

Regulation of global supply chains to combat forced labour is becoming increasingly common and impactful. Recent developments in the EU followed by new regulations and enforcement by the US customs authority are putting pressure on companies to monitor their supply chains more closely than ever. As the US and EU represent that world’s most important consumption markets these pressures will extend to companies globally, and have already been felt by Chinese and Swedish enterprises in the context of the recent US detention orders.